Gone are the days of emailing and managing bank and utility accounts from a single Windows or Apple desktop computer. Today we all have a quiver of smart electronic devices we use to manage and enhance both our personal and professional lives.

Browser based applications have provided software vendors with several benefits. First, thanks to bootstrap, developers are able to write a single application that targets desktops as well as mobile devices. Second, the latest security and encryption algorithms are built into web browsers. Third, the client/server architecture is built into each browser enabling software vendors to focus on their business rather than networking. Browser based applications, however; still have several major downfalls.

Each device manufacturer and desktop operating system implements there own Internet browser. Since each implementation is slightly different, application developers are required to develop and test against each browser negating much of the cost benefits browser based applications have historically provided prior to the proliferation of smart mobile devices. To make matters worse, browser updates often change application user interface behavior requiring software vendors to rapidly react interrupting current development cycles.

Second, browser based applications ride on top slow stateless ASCII based protocol stacks and data formats, namely HTTP, REST, SOAP, JSON and XML. These ASCII based protocols transmit 100s or even 1000s times more data than is actually necessary slowing applications and overworking networks with no technical reason to back the bloat. Also, since HTTP is stateless, neither event callbacks nor variable subscriptions are supported. Instead browser based applications must poll data sources for updates further overworking the network infrastructure.

Upper Setting offers a solution to the problem. We have developed our own network application framework, DotNetCloudServer SDK, that includes a stateful binary protocol stack we call FASTack short for Fast Access STack. Our network application framework is lightweight, secure, robust and easily implemented on any mobile or desktop operating system such as Android, iOS, Windows Phone, Windows, Mac and Unix/Linux flavors. DotNetCloudServer can handle all your networking requirements so you can focus on your business instead of networking.

The core of our DotNetCloudServer if our Remote Object Access Protocol (ROAP). ROAP exposes your server-side component objects, methods, variables and events to your client applications. Developers create their own objects in a stand-alone assembly DLL which is then automatically loaded and started by the DotNetCloudServer. Your applications can not only remotely invoke server-side methods but can also receive immediate event notification and variable updates as they happen without costly polling mechanisms found in our competitors' products based on REST or SOAP.

Granular role and user authorization (security access permissions) can be assigned to each method, variable and event enabling systems administrators to regulate who can execute methods, receive event notifications and read as well as write variables. For example, a variable can be configured so users can read the value but only administrators can update the value.

Support is included for the latest security and encryption protocol used on the Internet now, SSL/TLS 1.2, enabling the financial, aerospace and defense industries to implement data sensitive client/server applications with our framework.

Our session layer protocol has been designed to minimize the amount of damage denial of service (DOS) attacks can impose yet supports large packets.

A common problem many stateful client/server applications encounter is the ability to expose network failures in a timely fashion. DotNetOpenServer solves this problem with our Keep-Alive Protocol (KAP) commonly referred to as a heartbeat protocol. Both the client and server send tiny packets back and forth. As soon as the heartbeat stops the framework notifies the application the network has failed enabling server-side component objects to release associated resources and notifies the end user a network failure has occurred. 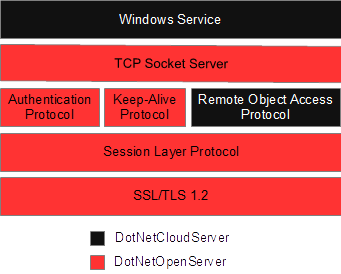 Our DotNetCloudServer SDK supports all of the major smart mobile device and desktop operating systems:

Download Now - It's Free. Then start developing your server-side components and device applications. Please direct any questions to mike@UpperSetting.com

Register now and we'll show you how you can quickly create interactive secure real-time mobile/cloud applications.

Interested in the quality of code we produce? Take a look at our open source communication library DotNetOpenServer SDK for Android, iOS, Windows Phone, Windows, Mac and Unix/Linux flavors.